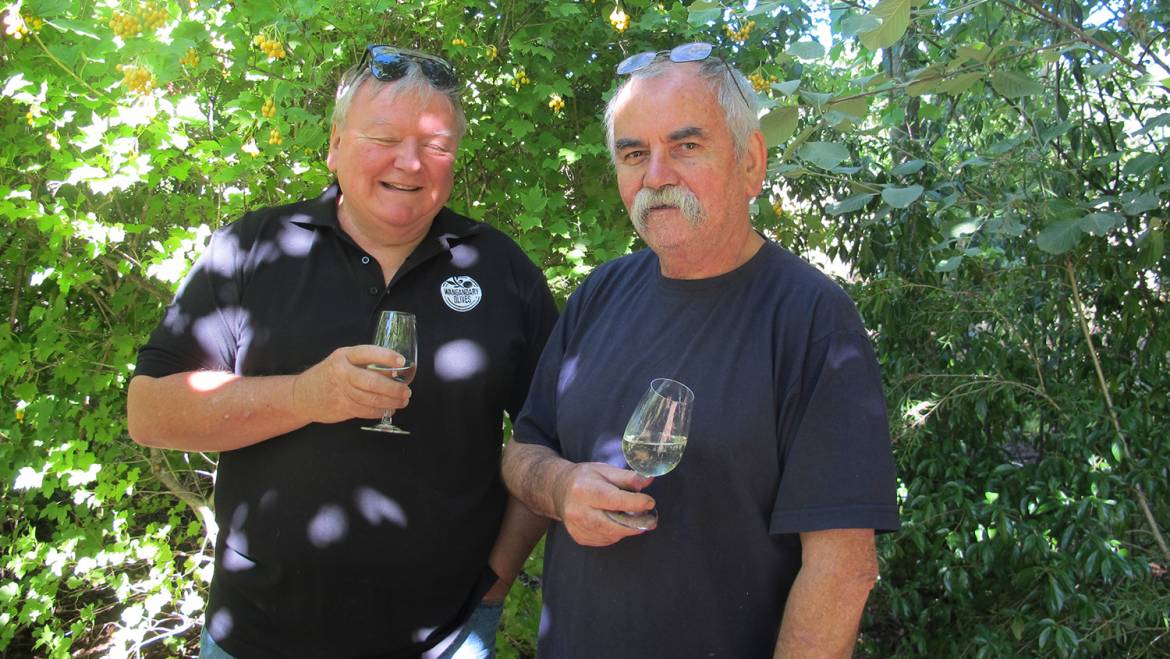 When two old friends who share a passion for food and wine with a lifetime of laughter, knowledge and creativity finally work out what it is they want to do when they grow up… it’s very definitely worth some respect and attention.

Bill Baxter had grown up on the family farm near Nagambie switched from studying the law and totally changed direction to study hospitality at William Angliss College and Victoria University. “My career in hospital catering management led me finally to producing organic extra virgin olive oil” Bill explained with a smile.

Michel Renoux grew up in the small village of Saint-Sulpice-la-Foret, in the heart of Brittany’s cider country. “My mother was a chef and my father was from a family of deep sea fishermen, so I went to sea and learned to cook and now make apple cider vinegar from my own fruit trees” said Michel with a Gallic shrug.

To understand their plan to ‘side step’ the pension and partner their award winning organic extra virgin olive oil and boutique batched apple cider vinegar, you really need to go back to 1981 when these two kindred souls started working together at Wangaratta District Base Hospital in the catering department.

They were both looking after four young apprentices as a part of their catering management roles. The apprentices had great training thanks to Michel’s incredible creativity and knowledge of food preparation. They also introduced at this time a competition for young people interested in World Cuisine called ‘Le Salon Gastronomique’. This was a wonderful time for both the hospital and it’s staff because the annual competition brought together young people from all over the state who shared a love of culinary arts.

Bill remembers how Michel’s infectious passion for food added so much value to the skills development of all these young trainee chefs.

In the years that followed Michel developed an extraordinary working relationship with St. Leonards Winery. He directed many seasonal ‘wine and food’ functions which at that time were quite unique in the industry. Previously there were no restaurants at wineries across Australia. Bill and Michel spent a lot of time working together over these years and grew to develop a wonderful friendship with a great sense of fun and enjoyment.

One occasion they both remember well was an annual industry dinner they were cooking for in the main kitchen of a large Canberra Hotel. Twenty minutes or so before meal was to be served one of the kitchen staff checked out some especially ordered rustic rabbit sausages and found them to contain bone fragments and gristle. Michel was furious and said he would throw them out and then do unspeakable things to the supplying butcher.

Bill calmed Michel down, the butcher’s life was spared, and the sausages resurrected with some special seasoning and sauces.

Later Michel and Bill were crying with laughter when the organiser came in and especially complemented them both on the flavour and texture of the rustic rabbit sausages!

These specially themed functions were taken up all over the state, and ‘the marriage of food and wine was born’.

During these times, Michel and Bill’s families became very close with regular trips to Mt Hotham and other holiday locations. “Michel was always master chef for these family occasions, and we became very great friends” remembers Bill.

Michel used to drive a very old and unreliable Skoda motor car. “One day when the engine had run out of water on a trip, Michel realised he had no spare water so he filled the radiator up with a flagon of Riesling” added Bill.

In very recent years Bill had been very busy at work and Michel had been spending a lot of time on his farm in Stanley. At a recent Farmers Market that they both happened to attend together they agreed that they needed to spend more time together.

A few months ago Bill had a vision while he was half awake of a beautifully decorated trestle table with an amazing selection of salad vegetables on a huge platter. Michel was at one end with his apple cider vinegar and Bill was at the other end of the table with his organic extra virgin olive oil. And so that became the catalyst for their next big new adventure… specially packaged and branded twin bottle packs of the two old friends’ products!